You are here: Home / Fertility / Cough Syrup (Guaifenesin) For Fertility?

Could taking cough syrup help you to get pregnant? When it comes to techniques for increasing your fertility this is a strange one, but it just might be effective. For more than a decade women have been using Guaifenesin, which is an expectorant found in many common brands of cough syrup, to increase their odds of conceiving a baby1. Guaifenesin is actually a tree bark extract that was first discovered by the native population of the Bahamas.

How does this work? Cough syrup seems to be pretty unrelated to baby making and you might be wondering how this would help you to conceive. However, there is actually some science behind it.

How Does it Work?

When you take a cough syrup, the medicine works to thin out the mucus in your lungs, so that you will be able to cough it up easier. However, the medicine doesn’t discriminate and it thins out all of the mucus in your body, including your cervical mucus. This is the fluid that is produced by your cervix during the ovulation cycle, providing a protecting medium that allows the sperm to move through the cervical canal and swim through the uterus to eventually fertilize the egg.

In order for the mucus to be easy for the sperm to swim through, it needs to be abundant and sufficiently thin. If it is too thick and viscous it will slow down the sperm and prevent it from reaching the egg. When the cervical mucus is of the right quality it will be vital to the survival and transport of the sperm and it will insulate it and protect it on the way to the egg. The importance of fertile cervical mucus during ovulation cannot be exaggerated.

So, could taking cough syrup be effective in thinning the cervical mucus and making you more likely to conceive? In a time when fertility treatments can cost thousands, it might be worth trying out this cheaper and potentially effective option. After all, the progesterone-based style of birth control pills work partly by using the opposite effect – making the cervical mucus so thick that the sperm cannot get through2.

A study that was published in the Journal of Fertility and Sterility in 1982 looked at 40 couples trying to conceive without any success for 10 months. The study showed that 23 of the women showed improvement after being given 200 milligrams of guaifenesin at a frequency of three times per day. Of these 23 couples, 15 became pregnant during the study. The conclusion of the study is that guaifenesin is one of the simplest and cheapest treatment methods of addressing the cervical factor3.

Robitussin, Mucinex, and Guiatuss are some examples of over-the-counter brand names which contains the Guaifenesin extract. Most women whom had success conceiving after using this method have suggested others to start taking the cough syrup 3 days before their expected ovulation day to one day after their ovulation day. Dosage will depend on the cough syrup’s recommended daily dosage level – just take it as if you’re actually having a ‘real’ cough! And ensure you’re not allergic to this ingredient.

Of course, this medicine will not work for everyone. If you have an infection, a tubal problem, PCOS or any type of hormone imbalance it doesn’t matter how much cough syrup you drink – it will not help you to get pregnant. Talk to your doctor about your particular health issues to find out whether this is the right option for you.

(This article has been viewed 918 times, with 1 views today) 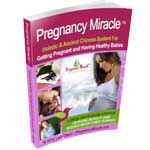